I’m starting a new placement next month, and I want to know how to be as helpful as possible in my

client sessions. How can I handle the first session so they are likely to want to come back and continue therapy?

Starting your first placement is a big step and one that most clinicians approach with some amount of anxiety as well as excitement. It’s a good idea to start by thinking about the first session with clients and how to engage them from the beginning. There is a lot to do in a first session–getting informed consent, establishing a therapeutic alliance, following the client’s story, beginning an assessment, and responding to the client’s wishes and goals–and chapter 3 of my book covers this topic. Communicating empathy and understanding is crucial in the first session as clients share their distress and pain. They are motivated to continue therapy when they have a feeling of hope in the therapeutic process. In this blog, I will describe two ways to instill hope during the first session.

First, clients feel hopeful when they have an awareness of their strengths, which provides confidence that they can face and overcome their difficulties. It is important to hold a “both/and” perspective in talking about strengths, reflecting that you understand the seriousness of the clients’ concerns and problems while also pointing out the capabilities reflected in their life stories. Most often, clients enter therapy feeling discouraged and self-critical. Feelings of shame and fear are common, whether their symptoms are new, have occurred at other times, or have been ongoing. There are a number of ways to identify and highlight the client’s strengths, depending on the initial presentation and the flow of the session. When the client leads with a description of what isn’t working and how their life has been impacted negatively, you can ask how they have coped with this difficult situation and support whatever positive coping strategies they report using. An example is “It’s impressive that you’ve been able to connect with a friend at least once a week, even though your depression has interfered with your appetite and sleep and your mood has been very low.” You can also ask about different areas of the client’s life and contrast areas of success with areas that are more problematic by saying, for example, “It sounds like your anxiety has made it hard to speak up in meetings at work, but you were able to advocate for your daughter to get the help she needed at school.” It also helps to reflect the client’s statements of strength in addition to reflecting and empathizing with their problems.

Second, clients need to leave a first session with a sense of hope in and direction for the therapy. I use the last 5-10 minutes of the first session for this purpose, including asking the client how it has been to talk about her concerns, summarizing how I would anticipate working together on her presenting issues, and expressing confidence that therapy can be helpful. I emphasize the collaborative nature of therapy by using terms like “working together” or “what we might look at,” and I provide a realistic assessment of the uncertainty and difficulty of changing longstanding patterns along with my belief that things can improve. A short summary statement is “If you want to continue working together, I would recommend looking at the emotions that have led to your outbursts of anger and how you can develop different ways to express those emotions before they become really intense. I know you’ve avoided the fear and sadness we talked about very briefly today, but I believe those emotions are related to the anger outbursts. You said your goal is to reduce your anger, and if you’re willing to look at those other emotions as you’re ready, I think you’ll be able to do that.”

If you keep these two strategies in mind in your first session with clients, I believe you’ll help them feel hopeful about continuing to work with you in therapy. If you’re interested in reading more about this and related issues, click here to order from Amazon or here to order from Routledge. 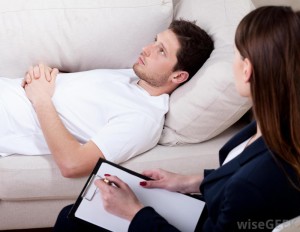 I have been assigned to see a 47-year-old man who told the intake worker he had been depressed for over a year but isn’t willing to take medication. I was finally able to reach him by phone after trying 3 times, and he scheduled a first appointment. Since then, he has cancelled twice saying he is too depressed to come in. I don’t know what more to do and don’t know whether I can help him if he can’t even come to the office.

It is difficult and often frustrating to have multiple phone interactions and messages with a client you haven’t met who seems unwilling or unable to participate in therapy. One way to think about this situation, which is covered in Chapter 2 of my book, is that the therapy begins with your first contact with the client. Sometimes we think of our first telephone interactions as administrative or business tasks taking place before the therapy itself. However, the therapeutic relationship actually begins when you first learn about the client, and you are likely to have the best chance of engaging him when you approach these initial conversations as the beginning of the therapy.

In this case, thinking therapeutically begins with evaluating the meaning of the information you have so far. Your client is developmentally in mid life, and his depression could be related to circumstances that commonly occur in that life stage—loss of a job, ending of a relationship, onset or exacerbation of a medical condition, or death of a parent or another loved one. It can be more difficult to recover from disappointments and losses at mid life, when people begin to experience the narrowing of opportunities that seemed open in earlier in adulthood. His sense of worth and value may be at a low ebb, and asking for help is associated with admitting weakness in many cultures, especially for men.

You also know he says he isn’t willing to take medication. Although you don’t know why he has made this decision, it is meaningful that he shared this with the intake worker. I would hypothesize that he wishes to maintain a feeling of control in the course of his treatment, probably offsetting other ways in which he feels helpless, frightened, and despairing. He is most likely to engage in therapy if he is able to feel a sense of control with you, and so far he seems to be exerting this control by cancelling scheduled appointments.

Before contacting your client again, I would encourage you to think about how you could approach a conversation with him with the goal of communicating a view of him as capable, rather than weak, and an approach to therapy that is collaborative rather than hierarchical. He might respond well to you reframing his decision to cancel your appointments and to not take medication, then you can move on to putting the decision about scheduling in his hands. An example would be “It seems like you’ve been able to reach some clarity about what is most helpful for you in managing your depression. Would it work best if I wait for you to contact me about setting up another appointment?” If he says yes, you could ask if he would like you to be in touch in a week if you don’t hear from him or if he would prefer to contact you when he feels ready. If he says he wants to schedule a session, I would recommend offering him at least two different times so he can retain a sense of control. For example, you could say “I’m in the office three days a week, and right now I have openings on Mondays at 2, Wednesdays at 10, or Thursdays at 6. Are any of those times possible for you?”

It is possible that using the approach I recommend will result in him not beginning therapy, but I believe it represents your best chance of engaging him. Regardless of the outcome, I believe you always will be most effective as a therapist when you think about establishing a therapeutic relationship with your client from the first contact.

I hope you found these comments helpful in your initial interactions with clients before seeing them in person. If you’re interested in reading more about this and related issues, click here to order from Amazon or here to order from Routledge.